Body sushi is a long-standing tradition in Japan, where it is known as nyotaimori. 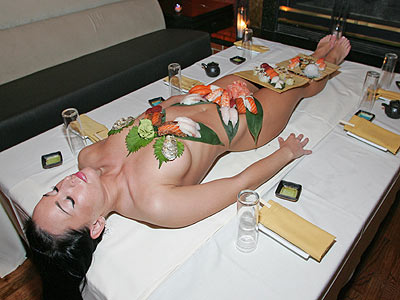 Less common is the practice of using a male model for the same purpose, this would be called nantaimori.

In the words of chef Mike Keenan, “The naked sushi idea began during the samurai period in Japan. It was a subculture to the geishas. It would take place in a geisha house as a celebration after a victorious battle.”

Considering ancient rituals such as burning people alive at the stake (Joan of Arc) or the scalping of victims by North American Indians, the body sushi ritual seems tame.

Before becoming a living sushi platter, the woman or man is trained to lie down for hours without moving since she or he must also be able to withstand the prolonged exposure to the cold food.

Body hair, including pubic hair, would also be shaved as a display of pubic hair may be seen as a sexual act.

Before service, the living platter would take a bath using a special fragrance-free soap and then finish off with a splash of cold water to cool the body down for the sushi presentation.

In some parts of the world, in order to comply with sanitation laws, there must be a layer of plastic or other material between the sushi and the body of the woman or man.

Guests should be aware that in the spirit of Japanese nyomaimori tradition, they are expected to fully undress and eat naked while dining.